Today we visited four houses. The first two villages were Rilly-la-Montagne and Ludes in the Grande Montagne de Reims. The final two were Epernay and Festigny in the Grande Valle de la Marne.

Rilly-la-Montagne is located on the northern side of the Montagne de Reims and is planted mostly with pinot noir on north facing slopes.

Ludes is also located on the northern side of the Montagne de Reims, just southeast of Rilly-la-Montagne.  It is planted mostly with Pinot Meunier and Pinot Noir. The majority of vines are planted on north-facing slopes, but there are some vines planted from west- to east-facing slopes.

Festigny is located on the left bank of the Marne valley, west of Epernay.  The vineyards in Festigny are located in the northern part mostly around the village and is planted mostly with Pinot Meunier. The slopes vary in direction on both banks of the stream Le Flagot as well as on the stream’s tributaries.  The soil is mainly clay-limestone marls which are favorable to Pinot Meunier.

Epernay is a major city in the central part of Champagne south of Reims at the Marne river, between some hills on the left bank of Marne that are formed by Le Cubry, a stream that empties into the Marne.  It has the second largest number of major Champagne houses, “Grande Marques,” after Reims. Several of these Houses are located on “L’Avenue de Champagne.”  Epernay has a number of Champagne bars and Champagne/wine shops, as well as a selection of restaurants that makes it a popular tourist destination. The vineyards of Épernay are located on the hills surrounding the city on the western and eastern side, and are significantly planted with Chardonnay, about 60% with Pinot Noir planted with 24% and Pinot Meunier about 16%. 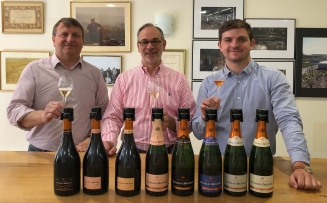 The house of Charles Mignon is one of our favorites, having visited now for the fourth time. Charles Mignon, headed by Bruno and Laurence Mignon, comes from a long family line of wine-growers originating from Mesnil-le-Huttier, a hamlet of Festigny.  Vineyards include those in Grand Cru Chouilly.  Vinification is in stainless steel tanks with care to maintain the essence of the terroir. We were pleased to meet with Bruno, Guillaume and Manon, and taste with Bruno and Guillaume.

The house of Maurice Lassalle was founded in 1930, by Marcel Lassalle followed by his son Maurice and now with his son Eric. The vines average 35 years from the villages of Rilly-la-Montagne and Ludes.  Winemaking is supervised by oenologist Fabrice Wehrung. We met and tasted with Eric and his wife.

The house of Trudon, after four generations, is headed by Jérôme Trudon since 2009.  It was founded in 1920 by Lucien, his great grand-father, passed on to Marie-Noëlle and Noël Trudon and now to Jérôme.  Jérôme is an experienced oenologist who distinguishes himself by his careful blending.

We met with and tasted with Jérôme.

The house of Bérêche & Fils was founded in 1847 and after five generations, the house is run by the sons of Jean-Pierre and Catherine Bérêche, Raphael and Vincent. Farming is significantly towards biodynamic and organic. Vinification is in oak barrels or stainless steel tanks.  Some cuvées are bottled with cork for the prise de mousse. We met Catherine, Vincent and  Raphael.

We were pleased to taste with Raphael, especially the last wine which was a cuvée of heirloom grapes which he graciously opened to celebrate our 100th cuvée tasted on our 2018 tour.

Visit What’s Open to learn more about these cuvées.

Thank you for taking our 2018 tour with us! We hope you learned a lot about the various regions, villages, houses, and cuvées we discovered along the way!